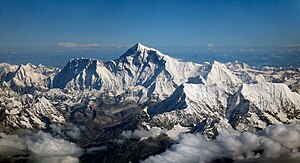 Asia is the biggest continent in the world and has the highest population: 4 billion people, that’s almost two-thirds of the world. China and India already have more than 1 billion inhabitants. The biggest country on Earth, Russia, is mostly in Asia. In the west, Asia borders Europe and in the southwest it borders Africa. If you take the water route going southeast you will get to Australia.

The biggest mountain in the world, Mount Everest is in the Himalayan mountain range. It is 8848 meters (29,029 ft) tall. The Aral Sea was once the third-largest sea until the people pumped too much water out. The Lake Baikal is 1642 meters (5,387 ft) deep. Usually, only oceans are that deep. The Dead Sea is particularly deep under the sea level, even though it is not that deep itself.

The word “Asia” comes from the Assyrian language and means “Sunrise”. The Assyrians were a very large culture in the near east. Other big cultures were the Indus civilization in today’s India and China. Asia doesn’t only have densely populated areas but also deserts like the Gobi Desert. Through it leads a piece of a trade route from Asia to Europe.