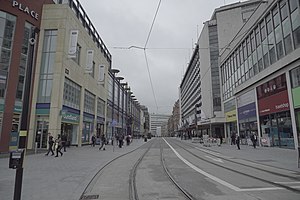 Bull Street in the city centre of Birmingham

The city was founded at the time of the Great Migration. It was named after an Anglo-Saxon tribe. In the beginning, Birmingham was sparsely populated because it was not so easy to farm there. In the twelfth century the city received the right to hold a market. This made it more important in the region.

However, Birmingham only got really big when industrialization began. Because a lot of coal was found nearby, which was needed for the steam engines, Birmingham grew into an important industrial city. Above all steel, weapons, textiles and chemicals were produced. But many service companies such as insurance companies and banks were also founded.

Today Birmingham is one of the most important centres in the country in terms of culture, business and education. Many important companies and universities have their headquarters there. Because Birmingham was destroyed in the war, today's cityscape is modern. The cathedral from the 18th century is an old landmark. It is built in the Baroque style and is the seat of the city's bishop.

Just outside of Birmingham is Stratford-upon-Avon. The poet William Shakespeare was born there. The place is popular with tourists because of the victorian houses in the old town.