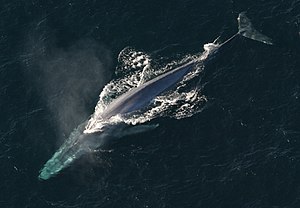 A blue whale from above. You can only see its back in this picture.

A blue whale in comparison to a human and a dolphin.

The blue whale is the biggest animal on Earth. Like all other whales, it is a mammal. It can grow to 33 meters in length and can weigh 200 tons. The heart itself already weighs as much as a small car (600 to 1000 kilograms) and pumps 100 liters of blood through its body.

Like other whales, the blue whale has to breathe every couple of minutes. When it breathes it releases a giant spurt of water, like a geyser, that's called blow. The blow can tower up to nine meters in the air.

Blue whales cannot chew their food, because they don't have teeth. Instead, they have a substance called baleen. Baleen works like a filter that keeps everything edible in the whale's mouth.

When blue whales search for food, they swim very slowly, like a human going on a walk. When they swim longer distances they go as fast as 30 mph. Male blue whales usually travel alone, and females travel in groups with other females and their kids.

Blue whales reach sexual maturity after 5 to 6 years. The blue whale mother carries her babies in her belly for up to 11 months. When the babies are born, they are about 7 meters long and they weigh about 2.5 tons. That's about as heavy as a heavy car. The mother feeds the calf for about 7 months. Then it is about 13 meters long.