Difference between revisions of "Europe" 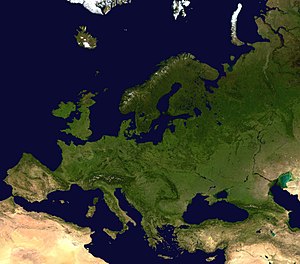 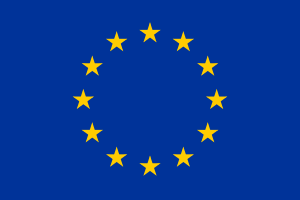 Europe is a continent. Even though it consists of more than 40 countries Europe is the second smallest one. The Atlantic Ocean is situated in the North and West of Europe, in the South you will find the Mediterranean Sea. In the East, Europe is connected to Asia. The border is a big mountain range called the Ural Mountains.

The European continent has a lot of coastal landscapes. It has a lot of islands, peninsulas, and inland seas. An inland sea, just like the North Sea and Baltic Sea is a part of the ocean that is almost landlocked. In contrast to China, there was never only one empire at a time like the Roman Empire. This may be because of all the islands, peninsulas and inland seas, where it was easier to defend against enemies.

Since the modern age, so since about 1,500 years ago, European nations had many different colonies on other continents. A colony is a piece of land that was bought or conquered by another country. Therefore almost the entire world used to belong to Europe. That’s why people in South America mostly speak Spanish and people in Australia or the United States English. However, between 1920 and 1960, most of the countries lost their colonies.

The people of Europe speak many different languages. If you count Russia to Europe, the most spoken language is Russian just before German. English is the language most people use to communicate with each other. Many European languages have their roots in the Latin language.

Europe has a lot of states and that won't change quite soon. However many states decided to work closer with each other. They are members of the European Union. The European Union creates many rules that should be valid in every European state. They call it the unification of Europe.