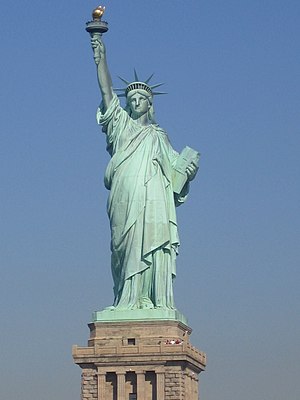 The Statue of Liberty in New York holds in her left hand the Declaration of Independence. At her feet lies a broken chain. The statue is a UNESCO World Heritage Site.

Freedom is when a human can do what they want. Ever since ancient times, people have argued about what the meaning of the word “freedom” is. They also asked themselves if everyone should be free or just some. After all, slavery existed back then. Slaves were never free.

Philosophers and religious people often wonder: Can a human be free or unfree in different ways? When it comes down to God or the mind, then a human is free. One should also have the freedom to decide what's right. Or else one would only be a toy in the hands of God. But humans are unfree in the world of mankind because they have the duty and responsibility to take care of others.

Freedom is a common topic when it comes to politics. The idea of human rights is that people should be free. Freedom means people can choose what they say, where they live, and what jobs they have, whether they believe in God or not and so on. But there are boundaries, for example, you can't say everything you want. It is not allowed to insult somebody, threaten somebody with violence, or to cheat somebody.

Freedom today means that people are “free from something”. The government can't do anything cruel or unfair to you, can't deny you everything and must protect you from others. Many philosophers and politicians say that people must have the chance to do something. People must have enough money to live. Otherwise, they couldn't benefit from their freedom.