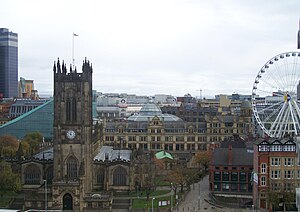 A view of downtown Manchester. In front you can see the cathedral and the "Wheel of Manchester", the ferris wheel. In the background you can see part of the skyline of the business district.

Manchester is a city in Great Britain, in the north of England. The city is inland, but ships can enter the Irish Sea via a canal. This is the sea between Great Britain and Ireland. Manchester has a population of around 550,000, making it the country's fourth largest city after London, Birmingham and Glasgow.

About 2000 years ago, the Romans established a military camp called Mancunium castrum on the Irwell River. The name is a mixture of Latin and Celtic and roughly means "camp on the breast-shaped hill". After the Romans left Britain, the Anglo-Saxons settled there and founded a city that they named Mameceaster, reffering to the name of the roman camp. Later it became Manchester.

Around 1930 the textile industry in Manchester became less and less important. A lot of money has now been earned in other areas for this. Examples are the construction of airplanes, electronic devices or cars. Manchester later also became an important center for computer science. The first modern computer was developed there in the years after 1940.