A big panda in a zoo 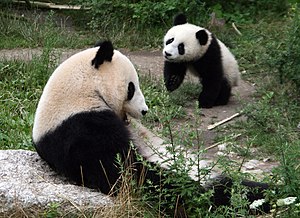 A panda mum with her 10 months old cub.

When one talks about pandas one usually means the Giant Panda or the Panda bear. The pandas used to be called bamboo bears. There are also names for the little ones, mostly known as a “cat bear.”. The panda is a mammal and belongs to the family of bears.

From the nose to the butt they can get up to one and-a-half meters long. The panda is usually recognized by its black-white spot pattern. The tail is a little bump so you don't notice it too much. They can be from 80 to 160 kilograms heavy.  That is about as heavy as two adult men. Pandas only live in a very small place in China. This causes them to be endemics. An endemic is a animal or plant that only exists in certain locations. There are barely 2000 pandas left on earth, which is why they are strongly protected. So that pandas don't go extinct, they are bred in zoos.  Pandas sleep in caves and  cracks in cliffs during the day. During the night they are awake and search for food. They mostly eat bamboo leaves but they also eat other plants, caterpillars, and vertebrates. In zoos they get used to eating honey, eggs, fish, fruits, melons, bananas, and sweet potatoes. To eat the panda sits down like a human. Pandas are loners. They only meet to mate in spring. The males walks off right after. The mother carries the babies for about two months in her belly. Then she gives birth to one to three cubs. The baby panda weighs about 100 grams so about as much a chocolate bar. The female raises the baby pandas by herself. For about eight months the babies stay with their mother, drinking her milk. A little while before the baby wanders off, the baby starts eating bamboo leaves as well. After one and a half years the cub walks off. Only after the panda is 5-7 years old it is fully sexually mature. A panda usually gets up to 20 years old.