Difference between revisions of "Philadelphia" 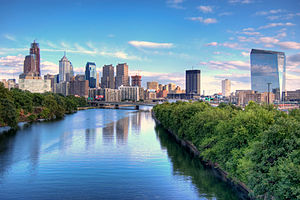 Philadelphia is one of the most important cities for the US economy. Most companies are in the service sector. There are many banks, cellular providers and insurance companies. The local industry makes chemicals, food, and parts for cars, planes and computers. Philadelphia also has a large sea port.

There are many sights in Philadelphia. One of them is the Independence Hall where the Declaration of Independence was signed. In the opposite building you can find the Liberty Bell that was ringed after the signing. If you walk a few hundred meters on Chestnut Street, you come to the "Museum of the American Revolution". Another famous place is the Museum of Arts. It is famous for a scene from the movie Rocky.