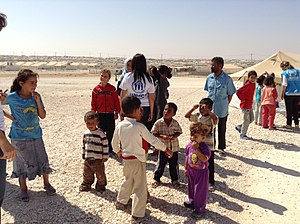 A refugee camp in Zaatari, Jordan. The United Nations is helping people who fled their country.

Refugees are people who need to leave their home country even though they don't want to. Many refugees flee a war, you call those refugees war refugees. Others are being persecuted, either by the government or other countrymen, who don't accept different religions, different languages or a different political opinion. Therefore, refugees often fear for their lives. That's when they have no other option than fleeing their country.

Other people flee from drought or hunger. Other people may be allowed to live in their country, but they are looking to earn more money, you call those refugees economic refugees. Refugees belong to the broader group called migrants who are people who leave their country.

For refugees, it is hard to leave their homeland and to bring their belongings with them on their trip. The journey can be risky and dangerous, they can be threatened by criminals, or boats that the refugees use to travel across the sea can sink due to the number of refugees on the boat. Sometimes they are not allowed to cross the border, therefore, they must return to their homeland even if it puts them at risk or danger.

Finally, the refugees arrive in a new land but don’t always know if they can stay and manage their living conditions. Many people say that they want asylum. If the country accepts the request, the refugee gets to stay in that country and receives help. Whether they do or do not get asylum depends on the rules in the country.

The refugees who don’t get accepted into the country must go back to their homeland, but many stay, which then makes them “illegal immigrants”, meaning they are breaking the law. In the countries where refugees are accepted many discuss who is actually a refugee, whether one must fear for their life or if economic refugees are really refugees.