Difference between revisions of "Revolution" 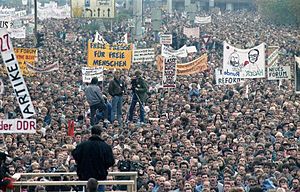 In 1989 people demonstrated for their freedom in the GDR. It’s called a peaceful revolution because people protested without violence.

A revolution is a big change. The word revolution comes from the Latin language and means “rotation”. People started using the word towards the end of the Middle Ages. Back then the word was used in Astronomy. It meant that the planets rotate around the sun.

Later the word revolution was used for a change in politics when a new leader or an entirely new group came to power. Rules were added and changed. Sometimes people also had different views about how a country should be ruled.