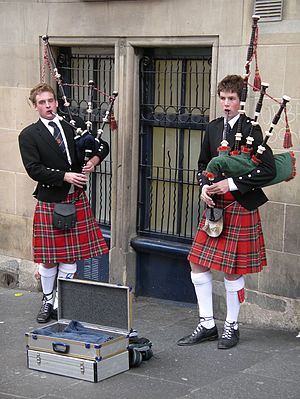 Two young men in Edinburgh play on bagpipes for tourists.

Scotland is a part of the United Kingdom like England, Wales and Northern Ireland. It can be found north of England and has around five million inhabitants. Most people live in the south. This is also because the north has a lot of mountains.

The name of the country comes from the Scoti, a celtic people that lived there in the early middle ages. Scotland used to be an own kingdom for several centuries. In 1603 queen Elizabeth died without having a heir. Therefore Scottish king James inherited the thrones of England and Scotland. A hundred years later, the countries also got a common government and a common parliament. This is how the United Kingdom came into being. Yet in Scotland the laws and customs often remained Scottish.

Since 1999 Scotland has had its own parliament and government again. The capital of Scotland is Edinburgh. This has been the case since the Middle Ages. Many Scots prefer to vote for their own party that only exists there: the Scottish National Party.

The highlands in the north of Scotland have deep valleys. As a result, there are many lakes and long inlets. A lake is called a "Loch" in Scotland. The word comes from a Celtic language. Loch Ness, for example, is known to be home to a sea monster. But the landscape also attracts many other vacationers from all over Great Britain.

Sports competitions take place regularly in the highlands. These are called "Highland Games". There are various competitions such as rope pulling, hammer throwing, races or traditional dancing. Because many Scots have emigrated, the Highland Games are known all over the world.