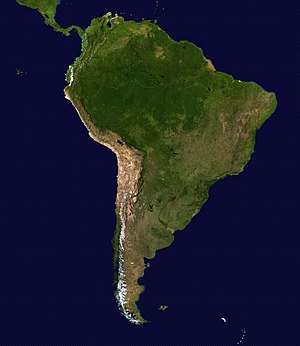 This also has something to do with the high mountains: the Andes reach all the way from the north to the south point of the continent, all along the west coast. They are the highest mountains in South America and the second-highest mountains in the world just behind Mount Everest. The Andes reach a height of exactly 6961 meters above sea level. In the Andes, there are a lot of volcanos, some of which are covered with ice throughout the whole year, especially the ones in the south. The surface of the glacier is 11 times the size of the glaciers in the Alps.

The biggest river in South America is the Amazon, it is also the biggest river in the world. In the mountains, forests, and deserts, there are a lot of different types of animals and plants. One of the most famous bird species is the Kondor, a very large bird. Another well-known animal is the lama which is part of the Kamala family. People use lamas to carry items they also have them for their milk and fur.