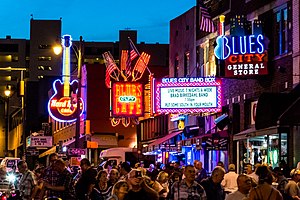 Tennessee is a state of the United States and is located in the southeast of the country. The state's name comes from an Indian settlement in the area called Tanasi. This settlement also gave its name to the Tennessee River, which, in addition to Tennessee, also flows through Kentucky, Mississippi and Alabama. Tennessee has a population of about seven million. The seat of government is in Nashville.

Tennesse is famous for its music scene. Memphis is considered the birthplace of the blues, while Nashville is a center of country music. Well-known whiskey brands such as Jack Daniel's and George Dickel also come from Tennessee. The city of Knoxville was the site of a World's Fair in 1982. Dollywood in Pigeon Forge is a large amusement park with roller coasters and other attractions.