Difference between revisions of "United Kingdom" 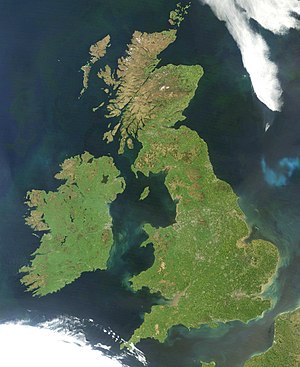 The United Kingdom gets its weather from the Atlantic Ocean. That's why the wind blows very strongly there, there is a lot of rain and fog. But it doesn't get particularly cold there. Temperatures below 0 degrees Celsius are rare, but it is usually humid and foggy in the winter months. In March it can be pleasantly warm like in spring.

Scotland in the north has mountains, just like Wales. England, on the other hand, only knows ranges of hills. The highest mountain in the United Kingdom is in Scotland: Ben Navis is 1,345 meters high.

Because the United Kingdom is made up of several islands, it has a long coastline. In the east of the country is the North Sea, in the west the Atlantic and the Irish Sea. A famous seaside holiday region is Cornwall in the south. To the west off the coast of Scotland are the Hebrides, a group of islands. To the north of Scotland are the Shetland Islands and Orkney. Both areas used to belong to Denmark for a long time.