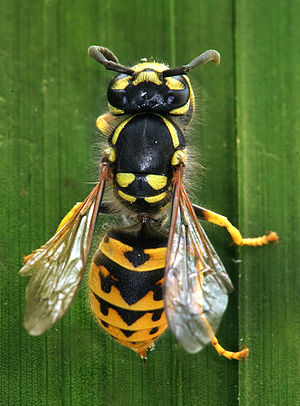 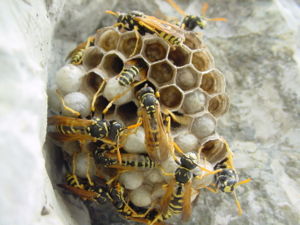 Wasps are working on a nest.

Wasps are insects that are closely related to bees. Originally, they only lived in Europe, Asia and North America. Through the years they have also been taken to South America and Australia.

One can distinguish all types of wasps by their black yellow patterns. If one looks closely, one can see that the patterns aren't just stripes. Because of the patterns, biologists can tell what type of wasp it is, since every type has a unique pattern.

How do wasps live?

Only the queen survives the winter time. In spring it begins building the hive and it lays its first eggs in the first cells. It reserves sperm from last fall in its seed bags. The queen eats insects and chews them to feed the larvae. The larvae then turn into female workers that continue to build the hive and take care of the larvae. Just like that the hive gets hundreds to thousands of new citizens.

Just like beehives, the hive is made of six-sided honeycombs. They are made when wasps chew pieces of wood and use their spit to make mush. They build the hive out of this mush. When it dries it's like paper. It's also as light but more fragile. Wasps build their nests in hedges and trees but also in attics.

Some larvae are fed better than others. From these the new queens awake. From the lesser fed larvae come the males, also called drones. They mate with a new queen but die afterwards. In winter the female workers and the old queen perish too. The new queens survive through hibernation and start building the nest again.

Adult wasps feed on nectar, pollen and stone fruit. That includes plums, peaches and apricots. The young ones eat trapped animals or their remains. The wasp’s biggest enemy is the wasp buzzard. It digs their nest open with its claws and feeds the larvae to its children. But wasps also get eaten by other animals such as birds, spiders and dragonflies.

Wasps defend themselves and their queen with their stingers. It is enough if they feel trapped. An example is when a wasp is in our shirts. They can sting again and again spraying poison in the prey's skin. It burns a lot.

The biggest type of wasp is the hornet. A lot of people are afraid of it because there's a myth that says: "7 hornets kill a horse, 2 a child.". That is not true though and in real life their poison is just as harmless as any other wasp’s.

When being around wasps one should be still and not come near the nest. Then they won’t sting. They only sting if they need to protect themselves or their queen.