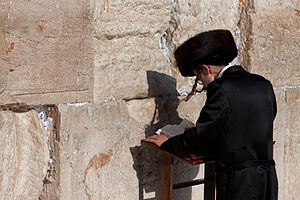 A Jew worshipping at the Western Wall in Jerusalem.

Judaism is a religion. The Jewish believe, like the Christians and the Muslims, in one God. The Jewish call God Jahveh. Being Jewish also means following a certain culture, ideas, and customs and finding them important.

The Jewish religion is not very different from other religions, but the differences are important. For example: the most important day of the week is Saturday, on which Jewish people go to the synagogue. This is their place of worship. They have many holidays during the year like Hanukkah and Sukkot.

Jewish men and boys who strongly follow the religion wear a kippah (a round cap that covers the back of the head). Higher holy people also wear hats, some of which have a lot of fur. Women and girls usually wear skirts.

How did Judaism come about?

The story of Judaism is written in the Old Testament. This is the first part of the Bible, but this is, like the Bible, no ordinary history book; it is a book of lessons and stories that teach us how to act. The Bible starts with the Book of Genesis with Adam and Eve in Paradise, a beautiful land. Later, Noah is mentioned in the story of the flood, then Abraham is introduced. It is said that Abraham immigrated from Iraq to Iran, modern-day Israel. God had ordered him to immigrate to these places.

Abraham’s first son was called Ismael, but his mom wasn’t the wife of Abraham; the mother was his maid, Hagar. Islam, a popular Muslim religion, was started by Ismael. Abraham's second son was Issac. Issac’s mom was Sarah, Abrahams’s wife. The Jewish religion originates from Issac’s teachings. God had told Abraham to cut off the foreskin of the male genitalia of his two sons and himself. This process is called circumcision. Jewish and other cultures still do circumcision.

Issac’s son was Jacob. Jacob had 12 sons. These sons formed the 12 tribes of Israel. One of the many sons was Juda. That’s where the name Judaism originates from. The Jewish needed to flee to Egypt but they were enslaved. With a lot of persuasion, Moses brought them back to Israel. This is what the Old Testament tells us. Nobody really knows if this is exactly how everything happened.

In 600 BC, the land where the Jewish lived was conquered. During the invasion, their temple was destroyed, and the people were sent to Babylon. Around 80 years later they returned home and rebuilt their temple.

Where do most Jewish people live today?

Jewish people worship in a synagogue. The word comes from the Greek language and means “coming together."

Today many Jewish people live in Europe, the Middle East and America. Some call themselves Zionists; Zion is another word for Israel. Around 1900, they wanted to establish a new state, where they had lived for almost 2000 years. They feared that they would not be able to live in freedom elsewhere.

Before and during the Second World War the Nazis murdered 6 million Jewish people in Europe. That is called the Holocaust. The Nazis along with their leader Adolf Hitler believed that the Jewish religion was degenerate. A hate like the Nazis had would be called Anti-Semitism.

Today Jewish people live around the world. Also the land of Israel has existed since 1948.