Cookies help us deliver our services. By using our services, you agree to our use of cookies. More information

Large parts of Oklahoma are prairie 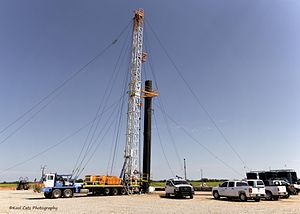 Oklahoma is the fifth largest oil producer in the US

Oklahoma is a state of the United States of America. It is located north of Texas in an area known as the Midwest or America's Heartland. The capital of Oklahoma is Oklahoma City, which is also the largest city in the state. Another major city is Tulsa further east. The State’s population is about 4 million. Like many other states, Oklahoma's name comes from a Native American language: In the Choctaw language, Oklahoma means something like "land of the red man".

Most of Oklahoma is prairie land but there are also some forests. Mountains are found primarily in the east, where parts of the Ouachita Mountains reach into Oklahoma. Some areas of Oklahoma are known for tornadoes. These violently rotating air columns can destroy entire houses and are also dangerous for people and animals. The fastest tornado in Oklahoma had a speed of 321 mph. Earthquakes and droughts are also common threats in Oklahoma.

Mining is an important part of Oklahoma's economy. Oklahoma is one of the largest producers of oil and natural gas in the United States. Coal, granite, limestone and gypsum are also mined. Especially in western Oklahoma there are large ranches where cattle is raised.

Oklahoma is a fairly young state. During most of the 19th century it was a reservation that had been settled by Native American tribes driven from their ancestral homelands in the east. In 1889 the area was bought by the US Government. Numerous pioneers stormed the area during the so-called “Oklahoma Land Run” and built Oklahoma City and other towns almost overnight. Because some pioneers already sneaked into the area before settlement was officially allowed, Oklahoma became known as the "Sooner State".