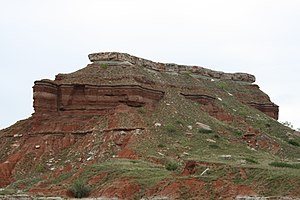 The Glass mountains in Oklahoma

Oklahoma is a state in the United States of America. It lies roughly in the middle of the United States and is surrounded by six other states: Texas to the south, New Mexico to the west, Kansas and Colorado to the north, and Arkansas and Missouri to the east. The name of the state comes from the language of the Choctaw, a Native American tribe. In English it roughly means "red man's land". Oklahoma has a population of approximately 3.8 million. The capital, Oklahoma City, is also the largest city in the state.

Oklahoma's landscape is mostly flat with only a few hills. Most of the mountains in the state are no higher than 2,600 feet. Oklahoma's climate is dry and temperate. Parts of Oklahoma are in what is known as "Tornado Alley". There are many Tornados in this region.

Oklahoma is still a fairly young state. It has long been a reservation for local Native Americans and those who were resettled there from other states. It was not until 1890 that whites were allowed to colonize Oklahoma. Back then, the settlers stormed into the country and built entire cities overnight. Large quantities of oil and natural gas were later found in Oklahoma.